In 1922, Saint Edith Academy, a boarding school for girls in Bristow, Virginia, was closed, and the high school department, consisting of four Benedictine Sisters, was transferred to Richmond. Together, these four Sisters (Sister Gertrude Head, O.S.B. who served as the first principal and the three-member faculty) began the educational program that is now known as Saint Gertrude High School. The school grew and thrived in its original Museum District building, eventually reaching its highest enrollment of 286 students.

Since its founding, Saint Gertrude has served as the “sister school” to Benedictine College Preparatory, intertwining many ceremonies, traditions, and programs between the two single-gender Catholic high schools. For 90 years, the two schools operated just 400 feet apart in the Museum District of Richmond. However, in 2013, Benedictine College Prep relocated to Goochland County on a 50-acre campus off River Road.


With a view toward their history and a desire to strengthen Catholic education, Benedictine and Saint Gertrude unified under a single new corporation, the Benedictine Schools of Richmond, in January 2020. And, in the summer of 2020, Saint Gertrude joined its brother school on the Benedictine Abbey campus, where the schools were once again in close proximity. Together, the schools now share a peaceful, modern, and sprawling campus including the campus’s new, world-class athletic facilities.


In the fall of 2020, Saint Gertrude broke ground for a new state-of-the-art academic building with an anticipated opening of late 2022, in time for Saint Gertrude’s Centennial Celebration.


From its inception, no matter the location, the high standard of academic excellence and the strong bonds of sisterhood have remained steadfast and will continue to do so for years to come. 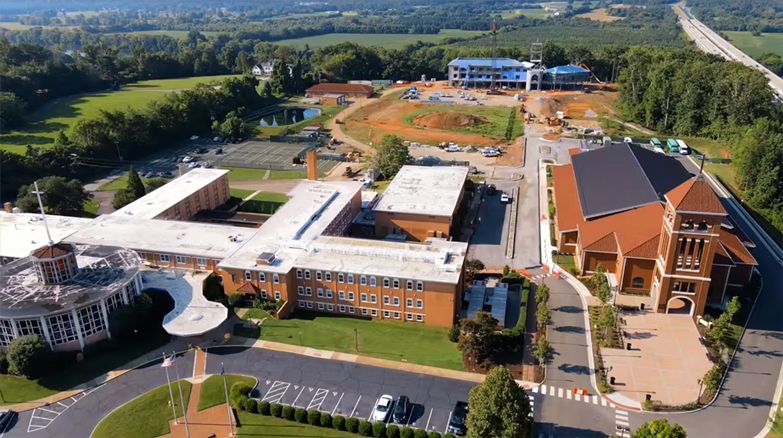 We are currently building a leadership-focused, STEM-ready school for the students of Saint Gertrude that supports educational excellence, extra-curricular activities, athletics, and spiritual development. With an anticipated opening of fall 2022 (coinciding with our Centennial celebration), this 44,480 square-foot building will feature: a great hall, new chapel, grand terrace, dining hall, fine arts and science wings, and an iconic bell tower emulating the original.

Watching the new building come to life has been so exciting, and we can't wait to show it to you in person!
SCHEDULE A TOUR